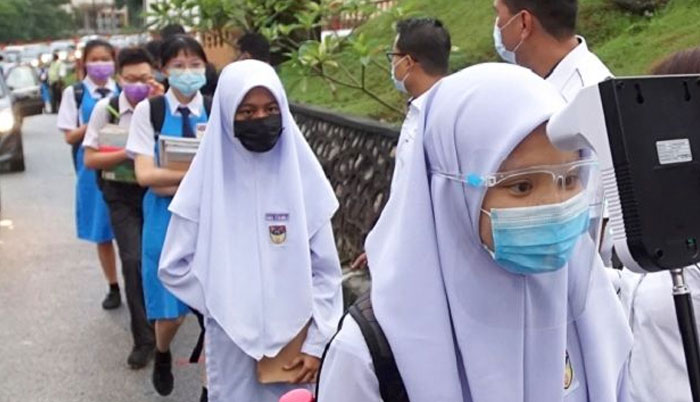 PETALING JAYA: All five million students are in school today, the first time that everyone is back since the country had to grapple with the third wave of Covid-19 cases.

While schools started welcoming back students as early as March 1 this year, only preschoolers and pupils in primary Years One and Two, followed by those in Year Three to Six a week later, were allowed into their classrooms then under a staggered return.

All secondary school students have resumed schooling today after five months, starting with those in Johor, Kedah, Kelantan and Terengganu yesterday.

The reason that secondary school students were the last to physically return to school was to make way for the SPM and STPM 2020 examinations, which were postponed to early this year.

Schools were first closed from March 18 last year with the imposition of the movement control order due to the Covid-19 pandemic. Even before then, a few schools had had to close after some students and teachers tested positive.

Primary and secondary schools resumed in phases from July 15 onwards but from Oct 14, schools in Selangor, Kuala Lumpur, Putrajaya and Sabah had to be closed again due to a resurgence in cases.

As cases continued to climb during the third wave, all schools nationwide closed on Nov 9 although the last day of the school year was supposed to be on Dec 17 or 18,2020.

Parents and teachers agree that if there is one lesson to be learnt from the past year living under Covid-19, it is that online learning has been an inadequate substitute for the experience and teaching in physical classrooms.

“We have to consider academic learning, mental health issues and the home environment and it would appear that the best for kids is to be in school.

“We cannot assume that everything was fine when we moved to online learning because it wasn’t. Hardly any learning has been done for the past year, ” she said in an interview.

The Education Ministry, she added, should not pretend that no learning was lost within the past year, adding that it must revamp its curriculum right away.

“It’s not just about moving forward but also closing the gap and retaining what was lost in the past year after the pandemic pushed some students even further backwards.

“We must cut out the banter and non-core subjects and make the curriculum more compact than before. We can’t go back to what we were used to before, ” she said.

She cautioned that if no curriculum changes were made, Malaysia could fall behind in the next Trends in International Mathematics and Science Study (TIMSS) and Programme for International Students Assessment (Pisa) reviews.

“Malaysia cannot lose sight of its aim to be in the top third of countries participating in TIMSS and Pisa by 2025 in line with the Malaysia Education Blueprint 2013-2025, ” said Noor Azimah.

National Union of the Teaching Profession secretary-general Harry Tan said based on a survey among teachers last year, 93% of the 10,500 respondents felt that face-to-face teaching and learning was the best approach.

“We cannot hide from this pandemic forever. Our lives need to go on. We are much better off now with the vaccine, standard operating procedure (SOP) and we also understand our ‘enemy’ much better now.

“To avoid a total collapse in our social lives, we need to learn and live with it, ” said Tan.

She estimated that only half of them in the Peninsula had any access to smartphones.

“There were a lot of weaknesses to online learning for Orang Asli kids and many of them have fallen behind so with schools reopening, they are excited and parents are relieved.

“It’s better for them to be in school than at home because online learning was inconsistent and not held daily, and the kids lacked proper guidance.

“However, we hope that the SOP in schools will be tight to ensure their safety, ” she said, adding that the constant closing and reopening of schools has been harmful for the children’s learning and mental health.

“I hope schools will stay open and not close again, ” she said.

Since the reopening of schools in March, there have been reports of Covid-19 cases in schools in the Klang Valley, Kelantan and Penang.

According to statistics by the Education Ministry, there were almost five million students at public preschools, and government primary and secondary schools as of July 2020.

In 2019, around 106,000 students enrolled in private secondary schools in Malaysia.